“In 1971, in the film Husbands, John Cassavetes staged the qualms of three old friends who had come to one of their friend’s funeral as an interior journey through a man’s middle age crisis. Samuel Mathieu’s show uses the same dramaturgic elements in front of the audience. The show exhibits what the film depicted and makes the news by portraying a cluster of individuals and their singularity. Four hearty performers were therefore needed, four solitudes gathered around this inappropriate strip-tease attempt, without any other aim than wanting to share the damning idea that they feel unique and the pathetic, heralded success of sharing the same lives (as a group or a boys band). 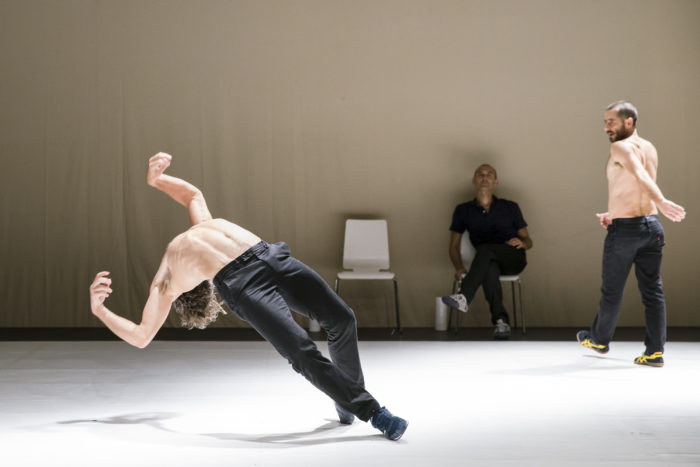 In this score for four, words give way to a repeated choreographic figure the keyword of which is grabbing: grabbing the space, sometimes passionately and directly, and sometimes discreetly when depicting intimacy or describing the shameful state of solitude, and grabbing the bodies and flesh, which the male dancers often do in the show, using a great variety of contact figures. In this constant grasp of the other’s body, weight becomes a way to measure time and the performers’ different ages can be measured by their ability to push down on the other dancers.

The slightly pathetic, or even ludicrous romantic touch in Cassavetes’ drunk men takes on a different aspect in the show with the four exhausted, worn-out performers sitting around a boxing ring, having an odd break in the middle of the piece. During this break, the dancers regain their strength, just like during half-time at a football game, drinking water and gazing vaguely at the partner or the opponent. Then, the men fall to the floor, staggering strangely in a heroic and martial way, and eventually come together to the edge of the stage for the final sequence, as if they were driven
into a corner. One can wonder what the men are thinking of as they are dressed with their intimacy. Maybe eternity, as suggested by the crude soundtrack reminding us of sexual intercourse. Maybe eternity.”
Annie Bozzini
Head of the Toulouse / National Development Choreographic Center from 1995 until 2016 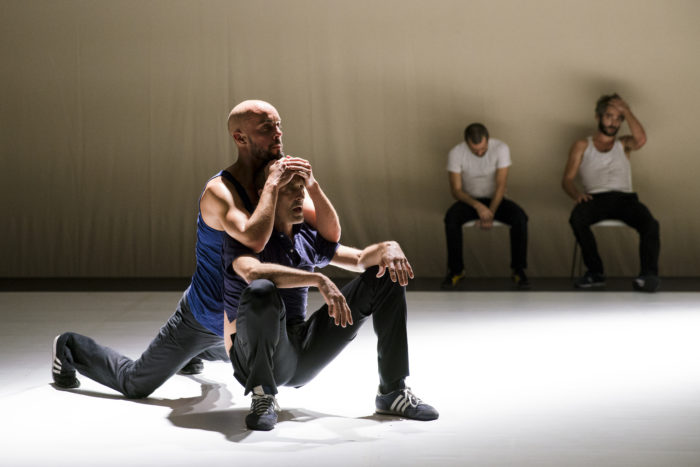