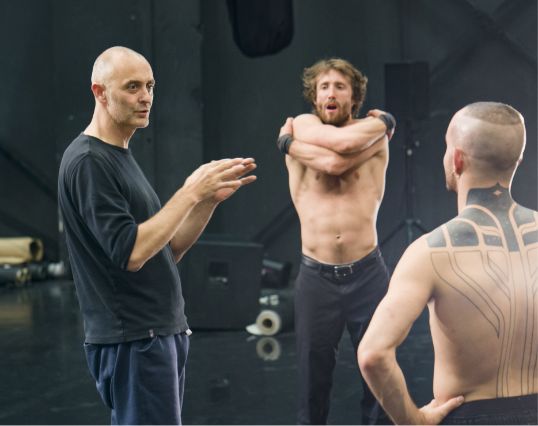 In 2001, after working as a performer with Régine Chopinot, Jean-Claude Gallotta, Robert Seyfried or Tuméo Vergés, Samuel Mathieu founded his own company and started working as a choreographer. He was a performer in his own pieces, composed the soundtrack, and created the stage design and the video. In 2004, he created Est-ce-O-Elle-O-solo for himself. Then a series of group pieces, including Us-Band and Go On!, during which he established a bond with his performers.

From 2008 on, his will to share experiences with foreign artists, to travel and to draw inspiration from other cultures led him to Germany first, to the Vorpommern Theatre, where he choreographed Nord-Reich-Nord. An experience that established the writing principles used again the same year in Yan, a Franco-Chinese project carried out in France, and also in Japan in 2009 with Generic-X.

“Writing the choreographic and musical scores should generate not only an intertwinement of disciplines and their processes, but also a decisive encounter aiming at a common object which would shatter The Code and give way to The Body.”

From 2010, Samuel Mathieu put forward to composer Maxime Denuc the idea of reflecting on the link between music and dance. He suggested two of three projects on the topic of the journey of Ulysses: Boutès, and then The Man who Plunges for which he was accompanied on stage by a string quartet, thus materializing the approach. Next came Remarkable identities, an epic piece shared by nine performers, as a reference to the Odyssey, and it became the crowning achievement of the approach.

“A piece in which the dramatic art comes from the bodies. Following through with the movement, in unity, without skirting around it, on the contrary, by sharing it, kneading it, challenging it and exposing it in order to extract from it the essence of universality and physical commitment”.

The writing process around physical commitment led to February 2014, when he created a piece for 8 dancers, R, a creation on the Rondeau, a dance from South West France, which he revisited on that occasion, challenging it in context in order to extract the essence of a necessity. In parallel to this emphasis dance, Samuel Mathieu materialized very recently the first part of a project combining dance and digital arts, a piece inspired from the works of Yves Klein and Pierre Soulages, and aimed at young audiences: The Dynamics of Emotions.

Finally, for his next creation , Samuel Mathieu pose the question of power to protagonists of the history of a place , a region, a country . A project that will be conducted in two time : a phase " preparatory " entitled Transfer , carried out in different European countries, Assassins then , the final project creation , planned for the 2016 season.

Samuel Mathieu’s dancing is halfway between a conceptual approach of the idea he wishes to convey and an assertive taste for a final object danced in a literal way. Early on, for his pieces, he required his performers to show strong physical commitment. Physicality is a word that he often refers to as a choreographer. A word that encompasses the notions of performance, demand, accuracy and speed at the same time.

Moreover, even though his career as a choreographer is interspersed with recurrent moments of self-examination which have led to the creation of a few soli in his repertoire, and even though he is attentive to all the performers individually as human beings, Samuel Mathieu likes the group, the assembly, and even the cluster, the intertwinements and the entanglements of bodies. With the group he searches for the rhythm of his pieces through alternating moments of unison and moments of confrontation.

For many years now, his creations have focussed on the link between music and dance, on the place of sound and rhythm compared to the dance, to the movement. A strong and long-standing collaboration with Maxime Denuc has enabled him to test several musical writing principles to accompany his pieces: real-time electronic musical composition during rehearsals (Generic-X), composition of a score based, just like for dancing, on improvisations, suggestions, exchanges and compositions with the musicians of a string quartet (The Man who Plunges), creation of a musical piece before the choreographic creation in order to observe the musical work’s positioning, in terms of influence, compared with the choreographic work’s (Remarkable identities).